In and out of Swedish and Russian control over the centuries, this little Baltic state was re-incorporated into the USSR after German occupation in World War II. Independence came with the collapse of the USSR in 1991; the last Russian troops left in 1994. Estonia thus became free to promote economic and political ties with Western Europe. The position of ethnic Russian (29% of the population) remains an issue of concern to Moscow. EU membership negotia

tions, which began in 1998, remain a domestic issue. 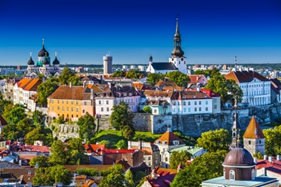 Estonia’s continued adherence to market reforms, disciplined fiscal and monetary policies, and a liberal free trade regime resulted in GDP growth in 1998 of 5.5% and a decrease in inflation to 6.5% from 11.2% in 1997. Like other small emerging market, Estonia has faced difficulties in 1999 as a result of continuing fallout from Asia. Key events of 1998 were the start of official EU accession talks, banking sector consolidation and the important role that Swedish capital played in the large banks. The IMF urged Estonia to maintain a stable economy and good reputation in international markets and to avoid populist policies in the run-up to March 1999 parliamentary elections.